The City of Sonora, known as the “Queen of the Southern Mines,” was established in 1848 by miners emigrating from the State of Sonora, Mexico. The early settlement was often referred to as the Sonoran Camp.

As with many communities in California’s Mother Lode, gold mining was the driving force behind Sonora’s early development. By 1849 the population of the town was approximately 5,000 and remains so today.

The animal driven Arrastra was used in quartz mining to pulverize the ore and release the particles of gold which were usually collected by quicksilver.

Although there was mining activity in the Sonora area in 1848, the first documented discovery was in Wood’s Creek (near today’s Sonora High School) on March 17, 1849. Unlike many Gold Rush towns, no specific individual is credited with the discovery of gold in Sonora.

The narrow sheltered valley with two all-year creeks (Sonora and Woods Creek) had long been a winter camping place for the indigenous Mi-wuk Indian people. They eventually moved their camps farther up into the mountains as the population of the area increased.

News of the gold discovery at the Sonoran Camp spread quickly and hopeful miners from the East Coast and foreign countries began the long journey to the promised land. Many boarded ships on the East Coast and sailed to Panama where they crossed the Isthmus on foot or horseback and vied for passage on crowded ships bound for San Francisco. From San Francisco it was an additional two day trip by schooner to Stockton and then a dusty stage ride through the foothills to Sonora. When arriving in Sonora the travelers were covered and choked with dust. They found a camp of dirt streets and tents with very sparse accommodations.

Many of the City’s early inhabitants were from Germany, France, England, Ireland and Italy, as well as those from Mexico and South America. Imagine walking the City’s streets and hearing the numerous languages being spoken.

The first record of Sonora organizing as a town was on November 7, 1849, when citizens met to discuss providing a hospital, after scurvy had raged through the camp during the preceding winter. The hospital was built and maintained throughout the ensuing rainy season, by the contributions of the benevolent and by the sale of town lots.

On May 1, 1851, Sonora was incorporated as a city and Mayor Charles F. Dodge presided over the first town meeting on May 26th.

The first Council immediately enacted ordinances related to gambling. Ordinance Number 14 outlawed any game “having in its tendency deception or fraud.” Ordinance Number 15 allowed faro, monte, roulette, other gaming tables, and games of chance, for a license fee. It is not clear why the games mentioned in Ordinance 15 were not considered as having in their tendency deception or fraud. Taming of the City had begun!

During the 1860s and 1870s Sonora had its own Chinatown with about 400 Chinese residents. Chinese stores were built side by side along the entire block between Stewart, Shepherd, Bradford and Lyons streets. Narrow alleys went between the stores to the rear of the buildings where there were small rooms used for living quarters. Two larger rooms that had several bunks around the walls were used as Opium Dens. Only a small monument on Stewart Street commemorates what was once Chinatown and only a few people today remember the once active community.

Tuolumne County was established as one of California’s original 27 counties on February 18, 1850, with Sonora as the County Seat. Sonora remains the County Seat and is the only incorporated city in the County.

The first Tuolumne County Courthouse was constructed of wood in 1853. This two story structure faced Green street between Jackson Street and Yaney Avenue. Water to this building was furnished through one single faucet from which containers were filled for use in the various courthouse offices. On court days a bucket of fresh water was placed by the courtroom door with a long-handled dipper hanging conveniently nearby for community use. Other amenities included spittoons for the interior rooms and outside privies. Electric lights were not installed until 1892 when the City of Sonora was electrified.

In 1898 the County tore down the old courthouse and replaced it, on the same site, with the masonry building with its distinctive clock tower that we have today. The new building faces Yaney Avenue instead of Green Street as the old building did. Local lore tells us that S. S. Bradford, a lumber baron who lived across Yaney Avenue from the courthouse, wanted the front of the courthouse to face his home instead of a side of the building, and used his influence on the County Board of Supervisors. 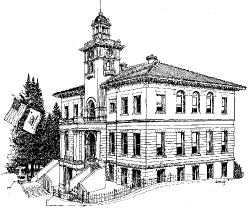 Like many old mining towns, Sonora has had a number of disastrous fires. The worst of these occurred on June 18, 1852, consuming nearly every building along Washington street, from Church Street to where St. James Episcopal Church (the Red Church) now stands.

Prior to the fire, wooden buildings along Washington Street were built close together without side streets. After the fire it was decided to create side streets as fire breaks, saving the City from total destruction during subsequent fires. Sonora’s downtown configuration has changed very little since 1852. The City’s last major fire in the downtown occurred in 1970, destroying several businesses close to and over Sonora Creek on the west side of Washington Street. After the fire, instead of rebuilding the destroyed structures Coffill Park was created.

Early Sonora had its share of desperadoes and a series of jails in which to house them. History records the most primitive detention device, an oak tree with a chain around it. The oak was succeeded by a series of simple buildings including a log cabin, a metal cage inside the jail building to house the most violent prisoners, and a masonry building. In 1866, a new jail was built on Bradford Avenue. This jail replaced a previous structure that was destroyed by fire in 1865, when an unhappy inmate set fire to his straw bedding.

The inmate, Tom Horn, was a miner from Columbia who had ridden into Sonora on a drunken spree. After being removed from his horse to save the animal, he made his next stop at the Riffle Saloon. Obviously in no shape to ride home, he was taken to the County jail to “sleep it off.” After the jailer checked his charges for the night and went downtown, Horn set the fire. As flames went through the building citizens raised the alarm, saving the other prisoners, but Horn’s door jammed and he perished in the blaze.

The new jail held its first prisoners on September 19, 1866, and was used as the Tuolumne County jail until 1963. During this time, the County Sheriff and his family lived at the jail with his wife cooking for the inmates and performing other housekeeping duties. Now home of the Tuolumne County Museum, it is open to the public with the old jail cells used to display many of the County’s historic artifacts.

By 1885, Sonora was well established and in need of a large community facility that could be used for various types of entertainment. Citizens had always shown an appreciation for local and traveling entertainment troupes and other community events. The Sonora Opera Hall was the answer to this need.

James G. Divoll and Joseph Bray originally built the Star Flouring Mill on the site. They had made their fortune from the Bonanza Mine, which was located just north of the “Red Church.”

In August 1885, the flour mill burned under suspicious circumstances. Many believed that robbers had broken into the mill thinking gold from the Bonanza Mine was stored there.

After the fire, Divoll and Bray immediately set to using the surviving walls of the flour mill for the Opera Hall. Just three months later, on Christmas Eve 1885, the Opera Hall opened with its first event, a roller skating party. The Opera Hall was active as a community center only until 1896, when the owners decided it was no longer financially viable. After 1896 there were many uses of the building, the longest being the Opera Hall Garage which closed its doors in 1979. The City acquired the Opera Hall in 1985, and through several historic preservation grants and civic contributions, the City was able to restore the building as an elegant community and entertainment center.

Sonora continued to prosper during the 1800s as the County seat and commercial center of Tuolumne County. As mining declined, the lumber industry brought a new vitality to the community and when the Sierra Railroad came to Sonora in 1899 the community welcomed the 20th Century with eager anticipation. Changes came slowly during the 20th century. New forest management policies impacted the lumber industry and tourism became a key component of the local economy.

Because Sonora’s downtown has changed very little from its beginnings, including its narrow streets and many historic buildings, it draws people from all over the world who want to experience the ambiance and charm associated with an earlier day.

Today the City maintains its historic charm. Many of its existing buildings including the Sonora Opera Hall, Tuolumne County Museum (originally a jail), and the Tuolumne County Courthouse date back to the 1800s.